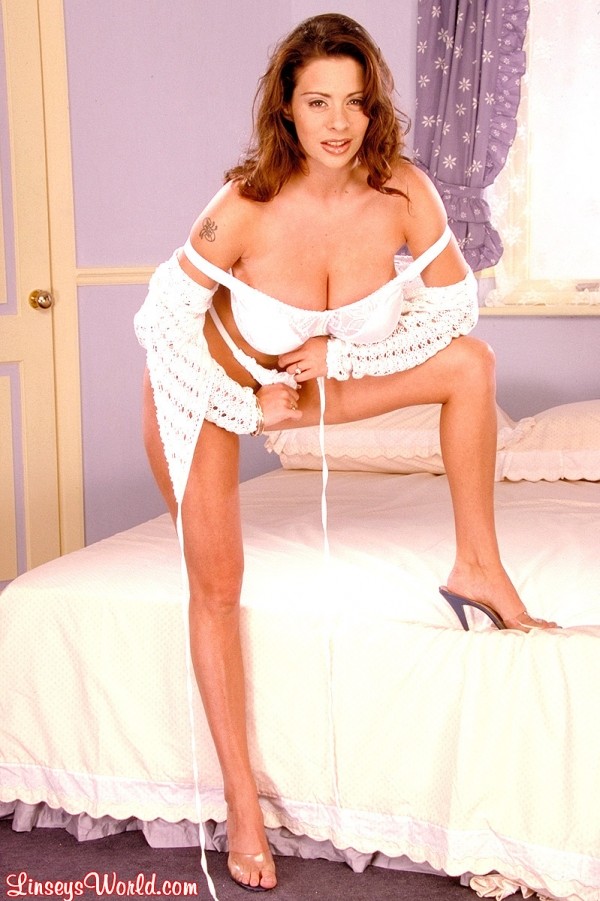 Of course, this is an early set of young, growing, maturing, developing, sprouting Linsey...you can always tell by the "Mum" tat on her right arm before she had a tattooist redo it. In the UK, they used to call this kind of set "American" because of the closing spread pink shots that were a no-no in most British men's magazines in the late '90s. By the time LDM posed for this layout (January, 1997), she was a huge magazine star in North America and Japan, thanks to the December '96 SCORE (the 50th edition of SCORE, released in October) with its well-remembered body-painted cover. "What a fresh, nice, new model from England. Linsey is a ten on most anyone's scale!" wrote S.C. from Lucas, Georgia in the March '97 issue. Linsey returned to the cover, or "the front page", as she calls it, in April '97 SCORE as Linsey For Hire dressed as a 40's era male private eye. 1997 wrapped up with the Holiday Boob Cruise special. Linsey was one of the 21 models on that trip to such islands as St. Lucia and St. Vincent. It was her first Cruise. "Undoubtedly the #1!" gushed passenger E.P. of Berlin. "The queen of this cruise. Fabulous body. The movie star. Fantastic bosom. A dream girl in every sense. Linsey was very nice and friendly to talk with. Wonderful charm. The most natural, best English girl I've ever seen!"