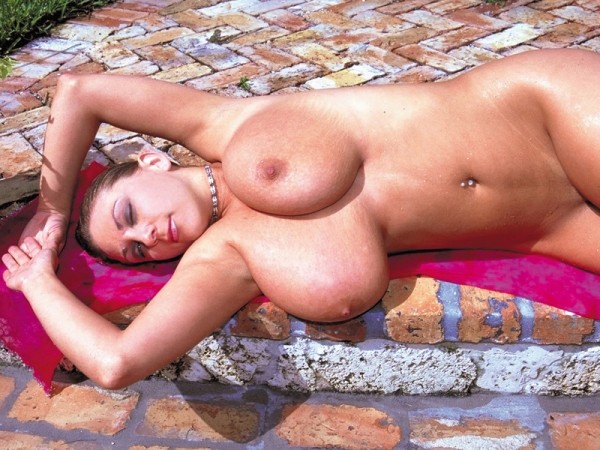 A SCORE Big-Boob Hall of Famer, Autumn-Jade from Huntsville, Alabama was a popular girl from the start in 1998, and her popularity increased in 2001 when she returned 20 pounds heavier with 34I-cups. Autumn had been slim at 124 pounds with already impressive 36DDD hooters on a 5'2" frame, but those extra pounds filled her out perfectly with most of the weight going to her chest. So there are two distinct phases to Autumn's modeling career: 1998-2000 and post-2001.

Autumn's pre-modeling days are well-documented in our magazines and on SCORELAND and Autumn-Jade.com. She was working in a chicken factory when a girlfriend told her to try bikini dancing in a local club. She came to SCORE's attention when our studio saw some snapshots, and from then on, her path was set. Autumn likes girls, so she was a natural for girl-girl action. Autumn got it on with Chloe Vevrier, Russian Kathy and Linsey Dawn McKenzie, and came across as the wide-eyed ingénue she was, although Linsey was actually two years younger than Autumn.

In late 1999, SCORE booked Autumn to sail on Boob Cruise 2000, but when our office phoned her with the Cruise details, her phone number in Huntsville was no longer in service. Autumn had moved without leaving behind her forwarding address and phone number. Boob Cruise 2000 sailed without Autumn, her whereabouts a mystery.

A year later in 2001, after some staffers talked and reminisced about Autumn, a SCORE editor set out to see if he could find her and bring her back. Over a few weeks, he spoke with different club owners in Alabama and left messages. A few months later, Autumn phoned our offices in Miami, Florida. She was dancing at Platinum Place in Memphis, Tennessee, and, thanks to a helpful club manager, word had gotten to her that the people from SCORE magazine wanted to speak to her.

The Autumn that showed up in our studio had matured and was much more confident, but she hadn't lost her country-girl style. She was still the wide-eyed, sweet, Southern chick who guys loved. The "new" Autumn-Jade appeared first on SCORELAND and then in the February 2002 SCORE and March 2002 Voluptuous magazines. In her video girl-girls with Lilith and Sierra, she was their sexual equals, and she decided to try boy-girl. Her first was an army boot camp session for Ultimate Autumn.

These days, Autumn is completely retired from modeling and fondly remembers her days at SCORE, her magazine appearances, meeting other models and her life at the time. An editor talked to her recently, and she's well and happy in Alabama and sends everyone her best wishes and thanks for their support.