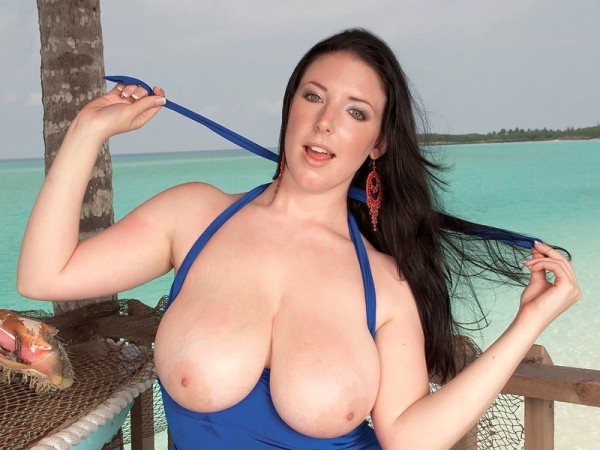 Nine years. Three major group shoots (B.L.O.W. in 2004, Big Boob Paradise in 2007 and last year's hardcore debut on St. Maarten). Numerous pictorials and videos. One of the few models to shoot her own pictures around town (in Sydney, Australia for a layout in Holiday '06 SCORE). Winner of 2007's V-mag Model of the Year. Tenth in the Best of The Decade 2000-2009. Australia's most valuable export! Angela White's association with SCORE is one for the record books.

Angela's first letter to us, mailed from Australia, introduced her as an 18-year-old hopeful, dreaming to be photographed for SCORE. She was far more than simply eager to pose. Her desire went way beyond that with an intensity that is still rare. An Australian freelance photographer could have been commissioned to shoot a set or two of Angela, but the editorial and studio staff saw and sensed something very special about this Ozzie teen co-ed, so the decision was made to send her a round-trip jet ticket for the 16-hour flight to Miami, the first time we'd ever done that. Up to that time, the furthest most of the models flew in from was the United Kingdom.

It turned out that Angela was a super-fan of SCORE and Voluptuous. She knew more about Linsey Dawn McKenzie, Lorna Morgan and other covergirls than many guys did. And she wanted to be one of those covergirls. SCORE made that wish come true. Angela would make a lot of busty friends on her trips to SCORE, such as Christy Marks, Brandy Talore, Gianna Rossi, Cherry Brady and many others and, to top off the dream, she got to share a bedroom on Eleuthera, the Bahamas with her idol, Lorna Morgan, for Big-Boob Paradise.

When Angela's first pictorials appeared in print, and her copies were mailed to her, reaction was swift. From L.B.: "Angela White has all the makings of a lasting V-Girl." Wrote D.M.D., "Angela is phenomenally hot, very bi, it seems, with a wicked mind to match her beautiful self."

Going back to Angela's response to her first magazines, Angela poured her emotions into her words. "My dream was to appear in SCORE like so many of my idols, like Linsey and Autumn. Honestly, it still seems surreal to me that I have actually made it. I feel better about my body now than I ever have. I'm now getting even more attention from guys, and it feels really great. What does it mean for me to appear in SCORE? It means my body can finally get the appreciation that it deserves, it means that I am actually living my dreams, and it means that I can finally be myself."

Angela has remained in touch with SCORE since 2003, keeping us abreast of her life, whether she was becoming a TV star back home, working as a bra tester for a top-secret sports bra project, earning her university degree or running for political office (the first international SCORE model to do that; Mimi Miyagi ran for office in Nevada).

Looking back, the decision to photograph Angela in 2003 was a game changer for both her and The SCORE Group.