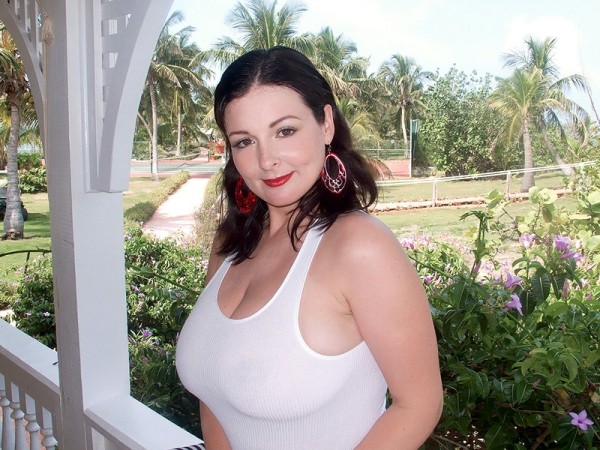 There have been some very good years in the history of big-boobed newcomers. There have been some great years in the history of big-boobed newcomers. And then there have been the sensational years, the ones that make us wonder, "Did it really happen that way or was it just a dream?" 1999 was one of those years. It was the year in which the tide turned in big-boob modeling from the slim 'n' stacked feature dancers who ruled the 1990s to the naturally stacked babes who would virtually dominate SCORE from then on.

1999 brought us Kerry Marie, Jessica Turner, Sylvia Panda, Diane Poppos, Annette Christianson, Via Paxton and, of course, Lorna Morgan. It's indicative of how great a year it was that Lorna did not win Newcomer of the Year (Via did), but it's also true that in 1999, the Big-Boobed Princess of Wales, as some have called her, was not at her peak. That would come a few years later, when Lorna joined Kerry, Chaz and Chloe Vevrier for On Location Key Largo, and again when she hooked up with us in Eleuthera, the Bahamas for Big-Boob Paradise. By that time, Lorna was a superstar and a legend.

It's true that Lorna helped usher in the British big-boob invasion that, it seems, still has no end in sight. But it's also true that with Lorna, it was always about more than her breasts (beautifully shaped, pale-white slopes with wide, ever-darkening areolae and nipples which always look like they're going to poke you in the face). With Lorna, it was always about her girl-next-door look and sunny attitude. Always approachable, always friendly, always projecting her personality to the camera, Lorna has received more marriage proposals than any SCORE Girl ever.

Lorna has always been special to SCORE, and so we've invited her to join us on some of our most-important on-location shoots to Portugal, the Florida Keys and the Bahamas, plus the 2000 Boob Cruise. Lorna would be the first to tell you that when she started as a models' agent in the 1990s, she never expected her life to go the way it has. But it did, and she's loved every minute of it. And when she became pregnant and her boobs got even bigger (and her areolae darkened), our love affair with Lorna continued.