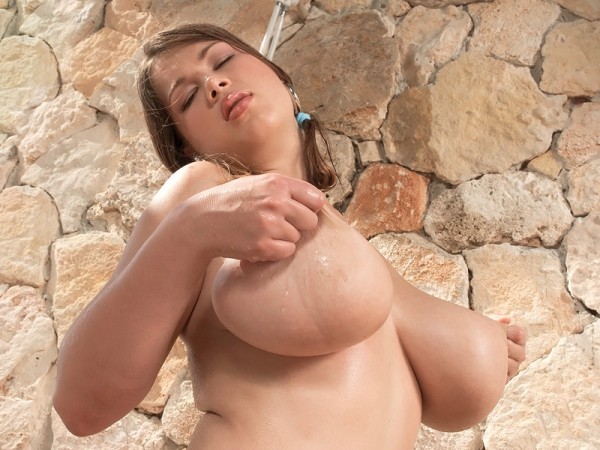 Terry Nova believes in a variation of former U.S. President Teddy Roosevelt's famous saying. "Walk softly and carry big tits" is quiet Terry's slogan. Terry should consider running for political office in her native Czech Republic. She's done so much to promote her country as a producer and exporter of some of the world's biggest and finest natural boobs. She could be minister of the treasury.

We first learned about Terry when one of our regular contributing photographers, a Czech herself, sent us Terry's test shots. One look was all it took. Later that year, SCORE invited Terry to join Lorna Morgan, Angela White, Gianna Rossi and Christy Marks for a trip to Eleuthera, The Bahamas for a week. We weren't sure if Terry would accept. She only knew a handful of English words, and no one on the shoot knew Czech. Would she feel out of place and isolated? Fortunately, she wasn't. SCORE Editor Dave Rosenbaum was on that trip and observed that, "Terry always looked like she was having a good time, but she also always looked like she wanted to say something but couldn't say it...because none of us would understand what she was saying."

When Terry and Gianna Rossi modeled together on the island, the theme of the shoot was that they were both dominant, big-titted cave girls. This was changed to a military-uniform theme, except no army ever issued uniforms like this. Despite the language barrier, busty girls think alike and can communicate telepathically, so the shoot went well.

A few months after Eleuthera when SCORE headed to the Czech Republic for On Location Prague, who did we call upon? You guessed it. This was Terry's first time doing hardcore for us. The sight of those pendulous tits swaying and swinging in the breeze while she was being filled from behind is one of those things you never forget.

Terry was such a hit once again and so accommodating a girl that when SCORE went to a old castle outside Budapest, Hungary for Busty Riding Academy, Terry was invited again to join with her friend Christy Marks plus Karina Hart, Melissa Mandlikova, Jasmine Black and Kristy Klenot. This time, Terry got to ride a horse for the film's riding scene on the lawn, and it wasn't a little pony, either. Although she's not the rider that country girl Christy is, Terry acquitted herself nicely. The "Hungary For Hooters" photo-report in SCORELAND's Galleries section has a few shots of Terry saddled up on our Hungarian version of Mr. Ed.

SCORELAND member Slothsaxon summed it up for many when he commented, "Terry could not possibly be more attractive: that angelic face, those perfectly juicy breasts, those luscious hips and shapely legs. She is everything beautiful!" 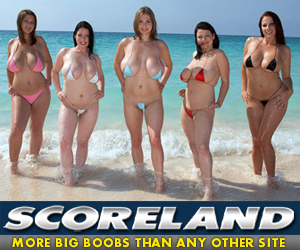