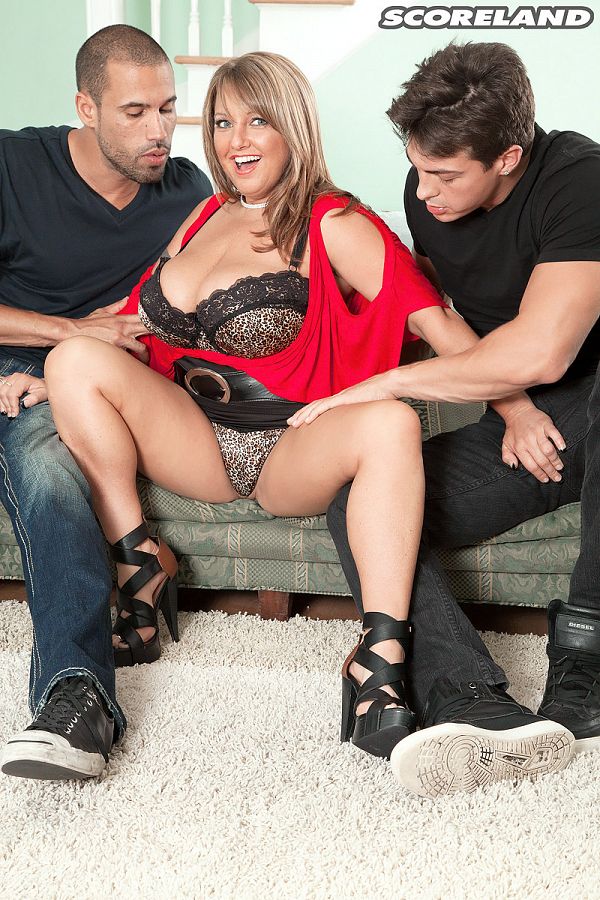 Double penetration is rare among SCORE Girls as it is among any other group of women. Very few go down that road. Some polls point to as few as 4% of all women trying a DP. While some like Christy Marks and Brittany O'Neil have done the deed with two men at the same time, they weren't double-penetrated by them. It takes a sexual explorer not only to do it but to do it on-camera. German SCORE Girl and sexual adventuress Annina once explained her attraction to DP in 2009. "It's so tight. I feel so full!" Annina told us. "My pussy is stretched around a cock, and my ass is stretched around another cock, and I feel like I am totally filled up. When one cock is going in, the other cock is going out, then the other way around." Holly Halston (My Wife Your Meat) and Daphne Rosen (Boob Science) are well-known for their DP scenes. The great Cassandra was DP'ed by two Brit studs in September '02 SCORE. Jasmine Black was DP'ed in April '09 SCORE. But that's been it until now. Exotic dancer Stephanie Stalls started modeling for SCORE in late 2009 and has moved past flying solo with spread pink and toys to slide into full-sex on-camera and then into anal sex in 2010. Now for the first time, Stephanie blows past another sex marker with a DP of her own, taking on two cocks, one in her pussy, the second in her butt. We knew Stephanie was a wild and randy one but we didn't know how very wild she is until now. Witness Stephanie in the hottest coupling she's ever done at SCORELAND and that's saying a lot considering the scenes she's had the past two years! Show Steph some love and let her know what you think of her first DP.