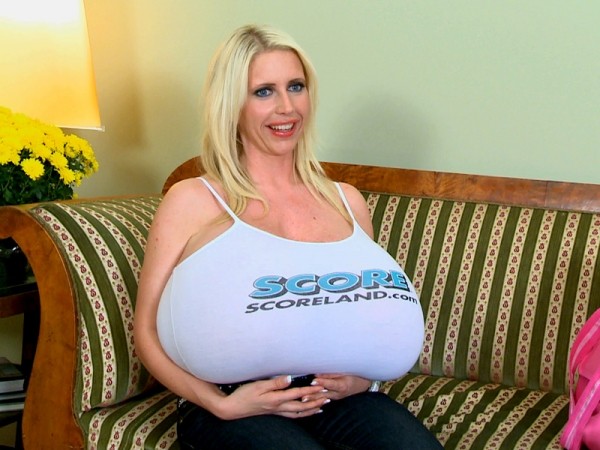 When the Blog announced Beshine's upcoming first appearance on SCORELAND, that entry, one bra photo and not a single word of text, drew over 70 comments--a record. That's the power of supersized boobs even today. While natural breasts claim supremacy now, a reversal of what things were like ten years ago, girls with science-fantasy tits still have the ability to make waves. Beshine, a pretty blonde German, seemingly came out of nowhere and the hidden cult responded. This debut video, the first of several, is an introduction to Beshine. "I knew I wanted to get bigger and bigger," Beshine says. "And when I started, I thought, 'I have to have them much bigger,' and then I thought that again, and so I grew and grew, and I liked it so much. I am very happy with them. I am really proud of my boobs, and I like when people look at me. Sometimes they are shy and make believe they're not looking. It's okay. I think that is cute. It started six or seven years ago. Maybe even a little bit earlier, when I really started noticing boobs. And I would see women with huge boobs, and I would think 'You have to do it. You have to get big boobs, too.' So I got bigger and bigger and bigger, and now I am happy. I love big boobs, not just on me but on other women, too. Really big boobs. I think the sexiest thing about a woman is when she has huge boobs. I love it, so that's why I have big boobs, too."