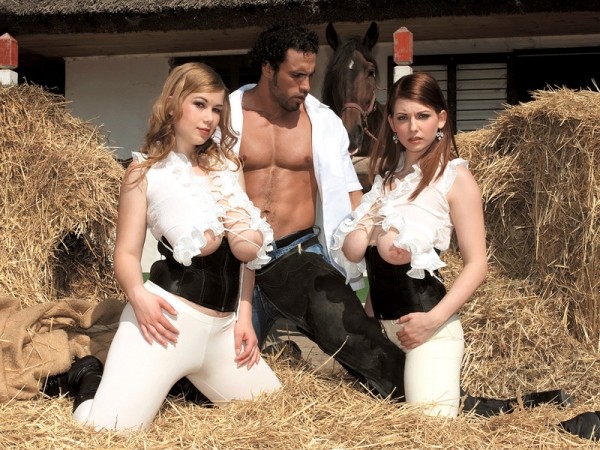 Here's one of the most unlikely pairings ever: American Christy Marks and Czech Terry Nova. The pairing isn't unusual because one girl is American and the other is Czech (although 20 years ago, you never would have seen anything like this) or because Terry is a big-bodied Amazonian while Christy is much more petite (her tits are really the only big part of her body). The pairing is unusual because two girls couldn't be more different: Christy, the horny teen who was always on the prowl for cock from the second we arrived at our estate in the Hungarian countryside (where this scene was filmed); Terry, the shy girl who never said much...although, now that I think about it, maybe Terry only seemed shy because she didn't speak English and we didn't speak Czech.

The thing is, Terry is 100% Christy's sexual equal in this four-way girl-girl-boy-boy, which was shot at an actual stable a few miles down the road from where we were staying. Christy sucks deep. Terry sucks deep. Christy takes a hard pounding and loves the cock. Terry takes a hard pounding and loves the cock. Of course, hours later, Christy was again walking the halls of the house in search of cock and Terry wasn't. But when the cameras were rolling, Terry gave as good as she got, and as good as Christy got, too.

This scene originally appeared in the DVD Busty Riding Academy. Christy and Terry are strolling the grounds of the Busty Riding Academy. They pair off in the hay, and things are about to get hot and heavy when the stable hand spots them and invites himself to their party. Christy and Terry suck and lick his cock and balls under the bright blue skies, not caring if anyone catches them while they thrash and moan. Suddenly, Lord Chandler, the stern boss of the manor, shows up. He's pissed. No stable employee is going to savor these two luscious big-titters without his involvement. He pulls his cock through his fly, and a four-way orgy begins.